“Quantity has a quality all of its own”, said Stalin famously. So why bring a little gun to the fight when you can bring an absolutely ridiculous chunk of self-propelled Nazi-blasting hardware? As dangerous as it was mean-looking, the SU-122 assault gun gave the Soviet love of overwhelming firepower wheels.

Buy one for yourself:

The Soviets produced a slightly bewildering array of tanks, assault guns and tank destroyers in WW2, and making sense of it all isn’t helped by the staid communist refusal to use catchy names.  Still, at least it’s less confusing than the US Army, who would give the same designation to several different vehicles (“exactly which M3 are we talking about?”).

Short version is that the mid-war SU vehicles were based on the T-34 chassis. In this case, they took a T-34/76 and shoehorned a 122mm M30 howitzer into it. This makes it roughly equivalent to the German StuH-42 with a little bit of extra smash in the gun but thinner armour. That armour was well-sloped and just as thick as the glacis of the original T-34, so especially when it first appeared it was a fairly tough beast.

The vehicle was in service relatively early, seeing action from late 1942 so was able to throw its weight into some of the more decisive battles like Fall Blau and Kursk that tipped the momentum of the war in favour of the Allies. The Soviets were often quite happy to pivot their assault guns into the tank destroyer role and vice versa, but unlike its bigger brother the SU-152 the SU-122 was never much of a tank killer. However, many a German infantryman would have had his day ruined by that big howitzer. One weakness of the vehicle was the complete lack of defensive machine guns. Tactically it wasn’t really considered likely that an SU-122 battery would find itself alone without friendly infantry to shoo German troops away, but in urban environments it’s not hard to see wily infantry being able to stalk a relatively blind and cumbersome vehicle like this. Just whatever you do, stay out of that frontal arc!

The production run was fairly modest by Soviet standards at 1,150 vehicles, but only one survives at Kubinka Tank Museum (now there’s a place to put on your bucket list!). But that still puts it in about the same production levels as the German StuH-42 and definitely a noteworthy old warhorse.

I started with Deweyycat’s free model from Wargaming3D. This is an upscale of a 15mm model from the immense “Bergman trove” of vehicles available on Thingiverse. Deweycat has done a lot of good work on it including some very nicely detailed tracks, but there were still a few things about this model that I didn’t like. The gun was very fat (so it could be printed on an FDM machine) and the whole rear end of the vehicle was very poorly detailed, with gigantic comedy rivets the size of dinner plates. I spent quite a bit of time trying to remove and replace all those rivets before I realised the whole thing was no good and needed a radical solution.

So I did my first ever tank “cut-and-shut”. Since the whole rear half of the SU-122 is identical to a T-34 I thought “why not just find a good T-34 model and use that?”. So without much trouble I found an excellent early T-34 collection on Thingiverse, grabbed one of the 1942 hulls with fuel drums on it, and scaled it up in Tinkercad until it matched the SU-122 and lined them up. Then I simply lopped the back end off the SU-122, the front end off the T-34 and slid the two halves back together. Hey presto! It’s not an exactly perfect seam, but I covered the join with some stowage on one side and it works. The rear end detail from the T-34 model is loads better than the original SU-122 model and it was pretty easy to do. While I was at it I replaced the fat SU-122 barrel with a slightly slimmer one and did a bit of other tidying up.

The resulting design is up on Thingiverse here: SU-122 assault gun (28mm)

The hull printed out pretty easily. I normally print 28mm vehicles in 0.05mm layers and angle them at about 46º because that should reduce layer lines, but the way some of the plates are angled on this vehicle I ended up with some quite strong lines on the front of the hull, which is the last place you want them really. Still, they’re pretty minor and I wasn’t going to redo a 7hr print just for that. I primed with a plastic primer and then sanded the areas I could get to a little before laying down the green spray. You can still see some faint lines on the front, but they’re not too bad.

The tracks were actually a lot trickier to print. I tried a couple of different orientations and one side printed ok but the other failed first at one end and then at the other. Not to worry though, this meant I could take the two failed tracks, cut them in half and glue the good ends together. And I’m not going to tell you which track it was, because if you can’t tell then I obviously did a good enough job! The road wheels, for you tank nerds out there are the all-metal version that the Soviets produced for a short while in the middle of the war when they were getting short on rubber. You also see ones with a mix of steel and rubber wheels. And yes, apparently the ride was horrific on these.

All up, the whole vehicle was a bit of a cut-and-shut job, with both digital and physical slicing to end with the right parts for a half decent SU-122. Now all it needs is some Germans to obligingly line up in front of the muzzle…

A bit of a random departure for me, this. It's a squad of futuristic soldiers in power armour. No, I don't really know why either, but aren't they cool? Space Marines Usually I'm very f...

The dinky little BA-64 armoured car is an iconic vehicle and when I saw a free model for one available on Thingiverse I decided I had to have one. It didn't turn out to be quite that simple, but this...

Very creative! I enjoy messing around in Tinkercad, and had some pretty good results too. The print looks really good. I do the same with stowage…hide the mistakes and what not. I built the Tamiya 1:48 scale model of this assault gun. May have to print out a partner for it. Thanks again for posting.

Thanks Greg. The 3D model is definitely a bit shonky around the join between the two halves, but yeah it’s easily covered with stowage.

If you do print one you might want to try a different orientation from me. I did mine like this: 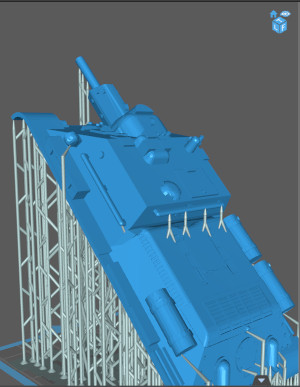 As you can see that means the front plate of the vehicle is pretty near horizontal to the plate. With hindsight, not the best. A much shallower tilt might work a lot better.

With my FDM printer down, I’m taking a nice break from 3D printing. I was banging out tons of vehicles not available in 1:48 scale. I would print with tracks down. I accepted the minor print support extras you get with printing it track down. I also print solid…well not 100% solid but not hollow. Getting that sweet spot seems to be the challenge. I find great models and some no so…they become wrecked/exploded markers on the table.

Yeah, solid gets a bit pricey and isn’t at all necessary in resin. Resin printers will quite happily print hollow stuff, I think I put a couple of supports inside the hull to support low spots on the roof but that’s it.