So far our Chain of Command campaigns have all taken place on the western front in the later period of WW2, a time when the Germans had largely been beaten, even if they hadn’t admitted it yet. But now we’re moving on to the main event: the Eastern Front, and a time when the result of the war still hung in the balance: Kursk!

Mid 43 was when everything was about to change. Since 1939 the Germans had held the strategic initiative in the war, launching a series of stunning invasions against Allied nations that had seemed nigh-unstoppable.

By summer ’43, the Wehrmacht was hugely overstretched and the Allies had rallied and begun to score significant victories of their own. In the Battle of the Atlantic German U-boats found themselves backed into a corner by increasing Allied air coverage, better ASW technologies, the code-breakers at Bletchley Park and better tactics. In “Black May” they lost 43 U-boats, and the Atlantic was lost to the Allies, allowing virtually unrestricted flow of men and troops from Allied arsenals in the US and Canada.

In the Med, the Afrika Korps and Italians had been defeated and 130,000 irreplaceable troops had marched off into captivity. Allied troops were gearing up for massive counter-offensive of their own, and had now been joined by huge numbers of US troops. The Americans had climbed a steep learning curve in North Africa, but were now ready to join the battle-hardened Eighth Army as it slammed into the Reich’s southern flank. Four days after the start of the Kursk offensive the first of nearly half a million Allied troops landed in Sicily in one of the war’s biggest amphibious operations.

Concurrent with Kursk, Allied forces stormed ashore in Sicily in the first of many huge amphibious operations in the Med Theatre

Mid-43 the balance in the Atlantic had tipped against the U-boats, and convoys were pouring across from North America

Overhead, Allied bomber numbers over Germany had been boosted by 50% when the USAAF joined the RAF in striking directly against the German homeland.

Everywhere the German forces had been pushed onto the back foot, everywhere except perhaps for one place: the Eastern Front.  In two years of fighting the Soviets had proved to be a much, much tougher opponent than the Germans expected, and had fought the invaders almost to a standstill. At Stalingrad the whole of 6th Army had been lost, and everywhere the Wehrmacht was being bled dry, while the Soviets seemed only to get stronger. But the Germans were gearing up for one last massive show of force.

With the Soviets keeping the pressure on the in the south post-Stalingrad, a huge salient had formed near Kursk as the Germans briefly pushed back the advancing Soviets and in bitter fighting captured Kharkov.  After the rainy period in spring (“rasputitsa”) both sides knew the armies would be on the march again. Always keen to mount an active defence, the Germans beat the Soviets to the punch and struck hard against the Kursk salient. This was to be a huge operation, and little did they know it would be their last roll of the dice on the Eastern Front.

German preparations hadn’t escaped Soviet attention though, and while the Germans stockpiled ammo and the new Panther tanks the Soviets dug, and dug, and dug. The German attacks would have to fight their way through endless deep belts of prepared Red positions, and would have to battle for every scrap of ground. The last great offensive of the German army was about the die gasping as it waded through a confusing tangle of minefields, obstacles and huge numbers of Soviet guns and troops. Apart from the weaker and fairly pointless Ardennes Offensive in the west in ’44 Kursk marked the end of German offensive operations and the start of an unstoppable Allied march that ended in Berlin itself.

But in early July ’43 neither side knew this. All they knew was that, on a front where titanic battles were the norm, the greatest battle of the Second World War was about to begin. 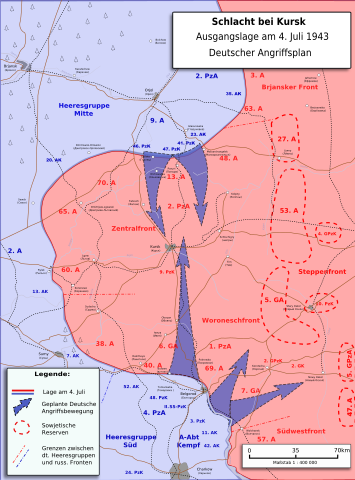 German plans for “Zitadel”, the reduction of the Kursk salient

Conceived as a classic pincer operation against the flanks of a salient, perhaps the biggest flaw of Operation Zitadel (“Citadel”) was that this was precisely what the Soviets expected the Germans to do. While the Germans managed to amass a fairly terrifying amount of combat power for the offensive, including large numbers of heavy Tiger tanks and the new medium/heavy Panthers, the Soviets were similarly able to hugely reinforce and prepare for the battle.

The Soviets also carried out an effective misinformation campaign. “Maskirovka” or operational and strategic-level deception was a strength of the Red Army and it’s fair to say that the Soviets had a better appreciation of German disposition and intentions than vice versa. However, no amount of deception will blow up a Tiger, and this was to be an epic battle like never seen before.

As well as strengthening defences within the salient, the Soviets prepared to launch counter-offensives of their own, hitting the rear of the German forces in both the north and south pincer.

This campaign takes place on the southern shoulder of the salient and pits the forward elements of the Grossdeutschland division against the 67th Guards Rifle Division near Butovo on the first days of the offensive.

The Germans have six maps to conquer, and they’re against the clock. For an outright win they need to sweep through in only seven turns.  Eight game turns means a minor victory. If the Soviets hold out for nine turns they earn a minor victory, and if the Germans haven’t won through by ten it’s a major Soviet victory.

The Germans are cut some slack in that scenarios 1, 2 and 5 are only played once, regardless of who wins. The Soviets are also unable to counterattack at any point in the campaign, which is a bit of a bummer. If the Soviets win in scenario 3, 4 and 6 then the Germans simply take another go straight away

The games in order are:

The Germans have three platoons and a bucketload of tanks to push through their attack, so can potentially tolerate a lot of casualties. The Soviets have to stretch out a single platoon to cover the first five maps, and then get a fresh one right at the end for the all-important “Breaking Through” scenario. Neither side has any reinforcements, so it’s going to be especially important for the Soviets to avoid heavy casualties early.

Holding the Scottish Corridor open by the skin of their teeth, the men of the 15th Scottish Infantry Division had managed to wrest the initiative from the Germans. As light fell at the end of the day'...

One Response to Kursk Campaign Overview “Storming the Citadel”

Very much looking forward to watching this one unfold… your campaigns are always inspirational for my games.